We spoke to language lecturers Mikiko Kurose and Melanie Bhend from the University of Nottingham to find out more about their use of Talis Elevate.

Can you tell us what you teach and which modules you have been using Talis Elevate on?

Melanie: I teach French to the 2 highest levels of the language course. I’ve been using Talis Elevate this semester with both groups. I’ve been able to experiment with having students work on an article, video, and on images.

Miki: I teach Japanese, all attainment levels from beginners to pre-intermediate. I also teach to the university’s exchange students from Malaysian and Chinese campuses. I use Talis Elevate for these classes but have used it more outside of the class than during class time.

In which ways have you introduced Talis Elevate to students?

Miki: I’ve assigned students collaborative translation tasks as homework in Talis Elevate. I want students to feel confident when they engage with the content, so I ask them to contribute to the point where they feel most comfortable. As there is quite a big variation between engagement levels, and indeed attainment levels, it was useful to be able to see the input from each student in the document.

I’ve also created video which was a set of slides that I had narrated which I uploaded into Talis Elevate. During the video, I asked students questions at various points either verbally or with questions on a slide, so they could pause, think, and then engage by commenting. 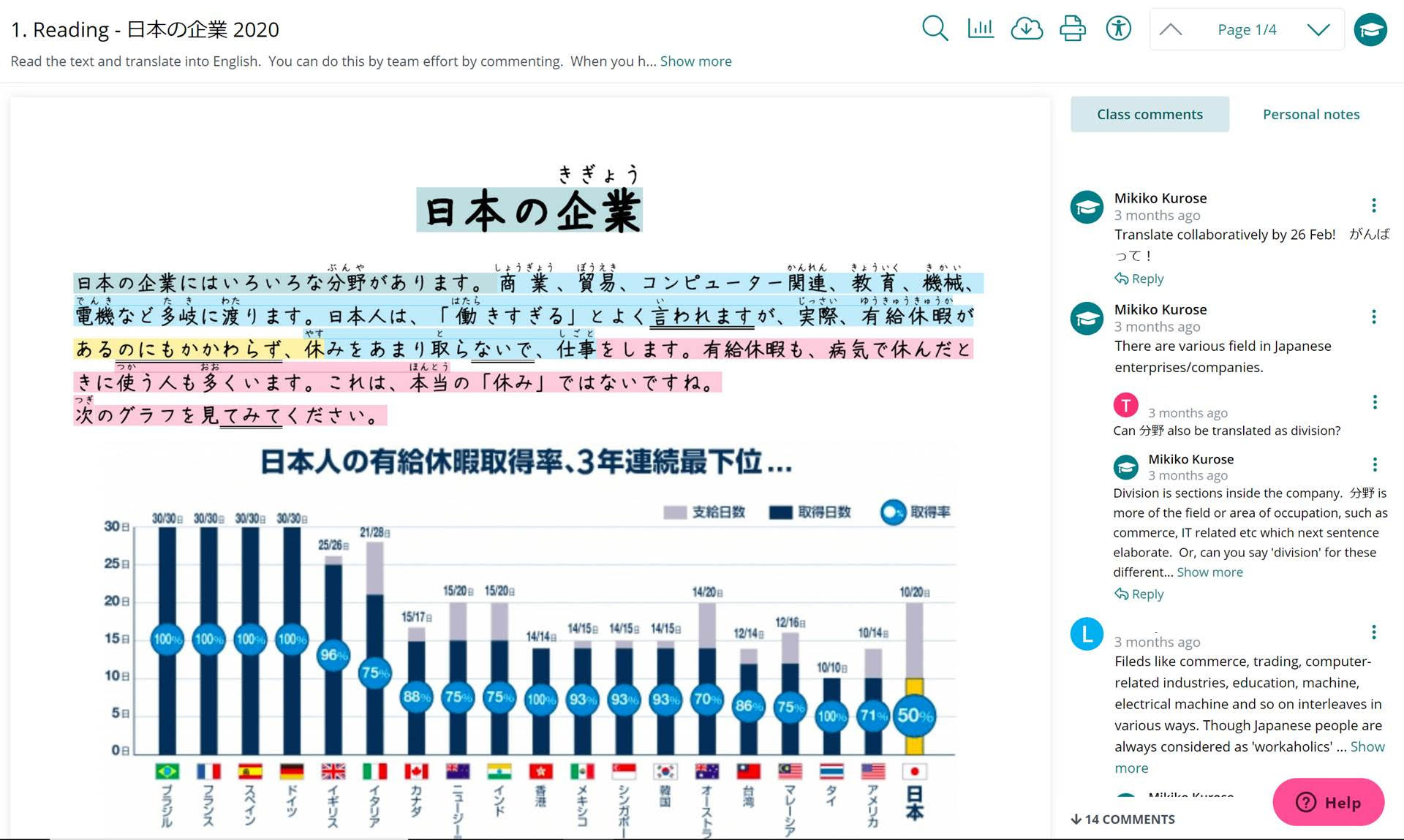 Melanie: Introduced it first in class, to get students up to speed with the tool. I asked them to prepare an article in Talis Elevate and then bring discussion points to the class.

I also used video content, which students really liked as they could comment as they went through at different timestamps of the video.

As we did this during a live session, they made their interpretation orally first, and then I guided them to comment this on the image. The aim of this task was to practice interpreting something orally in French, but one of the biggest advantages of doing this with Talis Elevate is that everyone’s contributions are saved there, and they can go back to it. Otherwise, this may have been lost. It was practice for an exam so it’s really good to have this for their exam preparation. They can go back and see everyone’s notes, not just their own.

I was also able then to spot errors and make corrections, which can be useful in language teaching. I’m careful with this, as I don’t want to put them off or single somebody out. This task was aimed at practicing speaking, it wasn’t a writing or grammar exercise. I prefer to make comments only when it’s beneficial to everyone, for example, a common mistake we’ve identified in class.

Have you been able to perceive any benefits of Talis Elevate? Has it had any useful impact specifically for language learning?

Melanie: The key focus of the tool is collaboration and I really like the collaborative aspect of it, especially with video content. In the past, we would show videos and ask students to complete worksheets individually. Now, I will upload a video, and ask them to answer the questions to the video directly in Talis Elevate, collaboratively, and all within the same document.

Of course, it depends on the aim of the exercise. Sometimes I want them to work individually, but it’s good for collaborative work. It helps them to see each other’s responses. Students don’t like being put on the spot, and sometimes see each other as competition. Once you get past this and they learn to work together, they benefit a lot from peer evaluation.

I’ve had classes where there has been a brilliant dynamic between them, they would comment on each other’s answers, expand on aspects, and reply to each other’s questions. That was great to see and Talis Elevate was a good platform to have them do this.

For language teaching, it helped me see how students were contributing, and how they were evolving as there is a trail of their engagement. When they work individually, it’s hard to spot where their strengths and weaknesses are. It helped me understand where they stood and allowed me to adapt my teaching based on the answers they provided and what they added to the document.

Miki: I found that text-based content and videos were good for asynchronous activity, asking them to collaborate on their side rather than in the class, as I think they had more time to review the content and think about their answers.

From what I’ve seen, Talis Elevate has also allowed them to go back to the content and add notes in their own time. Often the class moves quickly, and not everyone gets a chance to do this.

Talis Elevate was beneficial during the strikes too, it meant that students had something to work on that didn’t rely on them being in class.

Miki: I would, but I would want to carefully plan how to blend better between class teaching and Talis Elevate. I’d like to try image annotation too, as I haven’t tried this feature yet. I think this would really help with beginner levels. Like Melanie showed with her image examples, it can act as a stimulus for talking points. I’d like to use more video content too, to get students to watch them and comment, and then bring back ideas for discussion.

Melanie: Yes, I would. I agree with what Miki said. Another idea I’d like to try is uploading listening comprehensions. This is an important part of language learning, so I’d like to upload video examples of these for students to work with. At the moment, I’m asking questions which they are answering on a word document, so I might upload these into Talis Elevate.

Thank you to Miki and Melanie for contributing to this post. If you’d like to hear from other academics using Talis Elevate, check out our blog, or watch our latest interview videos from the University of Sussex.