Can you tell me about the module you teach with Talis Elevate and how it’s being used?

The module is a first-year module called Making the Middle Ages, which is compulsory for the single honors History course at the University of Nottingham. All students on the course attend one lecture a week and then they break into small seminar groups for sessions once a week. There are around 20 students for these seminars and we assign them a series of readings on a topic that has been approached broadly in the lecture too. For example, we had the topic of Charlemagne. We asked them to read a couple of articles based on the figure or historiography of Charlemagne and then ask them to look at primary sources. Each topic takes two weeks to develop, the first week is dedicated to the historiography and the second week is dedicated to primary sources.

It has been important to use Talis Elevate to deliver this content because students often come with an ‘allergy’ to medieval history. Engaging with this content, particularly the primary sources,  has been a problem for many years because medieval sources use a lot of language and symbolism that is quite different, so they find it difficult to understand and tend to miss the multi-layer element of the sources. Previously, they were doing the study around these sources on their own before coming to class, and they were reluctant to ask questions about them before coming to class. If they asked questions at all before the seminar they had to do so through email. This was very clunky.

“This gives them a boost of confidence as they see they are not always wrong or that other people think the same.”

With Talis Elevate now they get to have a brainstorm amongst themselves together by annotating the source directly. This gives them a boost of confidence as they see they are not always wrong or that other people think the same. I can moderate their comments as well, check in on what they are saying and whether they are grasping it or not, and give them small hints if they need it.

I find that they engage a lot and when they come to the seminar and that after having been reading content with Talis Elevate they are much more confident. I find that they have done more research to complement what they read and they have been able to connect it more with the articles from the bibliography that they have been reading. They don’t view it in such an isolated way as before and it gives them a much more integrated view of what the primary sources are. 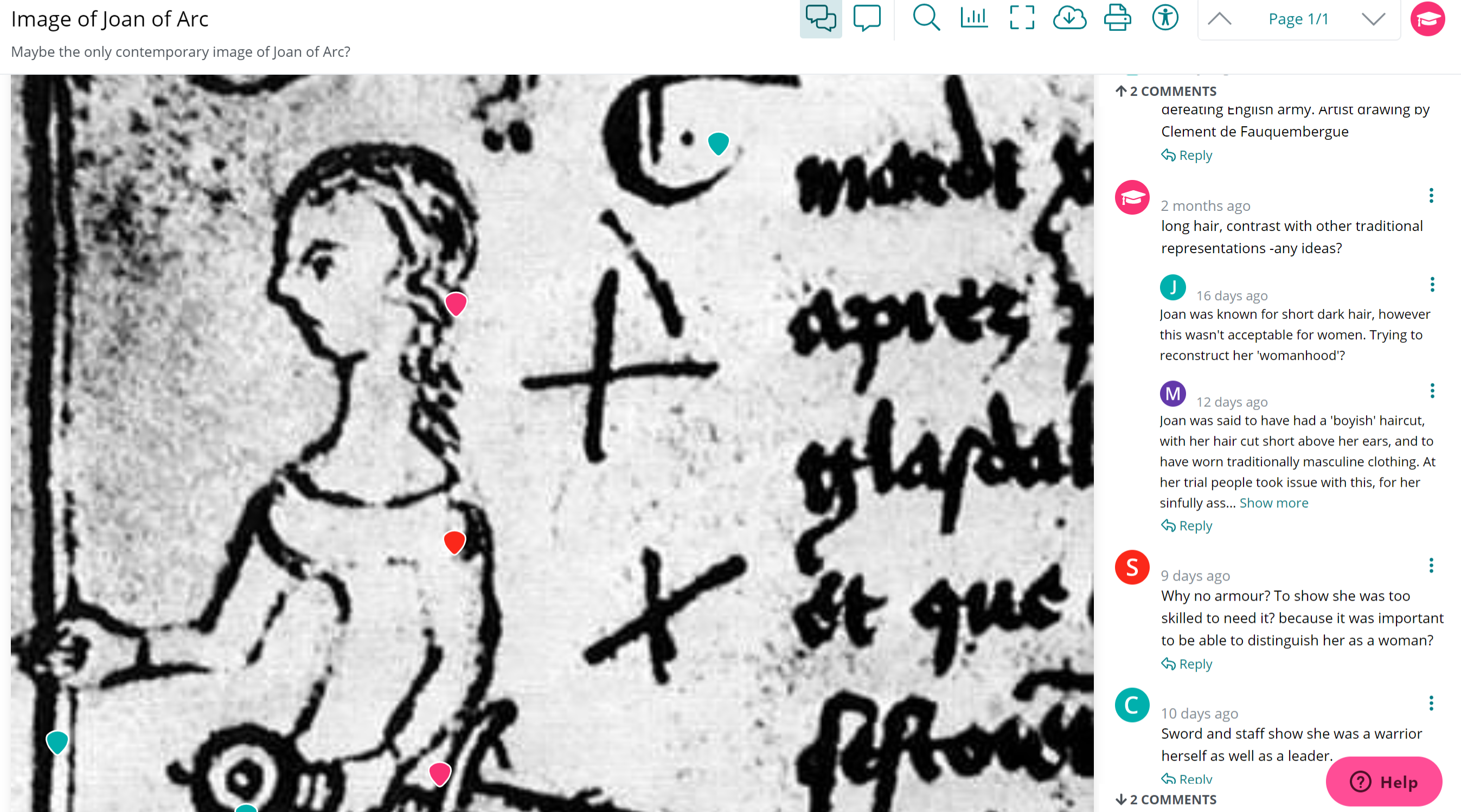 What is your approach to seminars and how have you made Talis Elevate part of this?

We run student-focused seminars. I propose questions, indicate paths of interpretation, but mostly moderate what they say. It’s their discussion that’s important. This is to help them develop skills for analysis and critique, promoting deep learning rather than just taking what someone else is saying.

It means they are much more hands-on in the class, so even in the seminar group, we break them down into even smaller groups. Sometimes they work on the same questions or different questions, that are centered on the readings they’ve done around primary sources. It is their work that matters not mine.

“It’s quite a good method to bring the outside learning into the classroom. It’s also very visual and they like that.”

They are prepped beforehand with the content via Talis Elevate. Sometimes we use Talis Elevate within the class to support what they’ve been doing, so I put it on the screen with comments shown and we go over them to activate discussion or go deeper on certain comments, or address issues commonly touched on. It’s quite a good method to bring the outside learning into the classroom. It’s also very visual and they like that.

Have you had any feedback from students?

I did a survey and I got good responses. I would say 60-70% have engaged well with Talis Elevate and have found it positive. Generally, they feel more confident and get a more integral understanding of the sources with the context of the other material. They also like private annotation, they even download it and use it later for study. Their own notes and class comments help them think deeper.

Some have said it’s not their learning style, but I even find that positive, as it has helped them to reflect and identify how they like to learn.

Did you find it easy to adopt and integrate into your teaching methods?

I found it absolutely fantastic because in the way that I didn’t have to learn a new skill. We are often overwhelmed with new systems that take a while to get to grips with and understand how to integrate, but this was very organic and was very easy to work with what I was doing already. It gives me ways to diversify and do new things. It’s not rocket science but it does have the technicality of making it sophisticated in class. So what’s not to like?

What have the changes been since you implemented Talis Elevate?

I tried to work with Moodle forums but it was clunky and I found it difficult to motivate the students. I used to send them questions to keep them engaged during the week. Often they struggled to understand them because I couldn’t relate it to specific bits of the text like I can with Talis Elevate.

In class, I used to put the text up on the board and make comments, but I see sometimes that whilst I’m using Talis Elevate in class now they will make comments or notes on the same document as we are going along. Or they will prepare ideas beforehand and make personal notes or class comments, and sometimes after the class too. It keeps the engagement going for longer which is good.

How has your use of Talis Elevate been affected due to COVID-19 and shifting teaching to online?

There have been a lot of comments!

We’ve been having virtual chats through Microsoft teams at our usual seminar time and using Talis Elevate alongside.

“There have been students who have told me that they are very grateful for Talis Elevate during this time, it was helping them to keep their sanity”

There have been students who have told me that they are very grateful for Talis Elevate during this time, it was helping them to keep their sanity – they said that exactly. It has been really nice for them to have this tool at home and keep up with their routine.

I have to say the engagement levels have been lower, which is to be expected. The numbers joining our seminar calls have been quite irregular because of the situation but it could also be because essays are coming up, so maybe they are focusing on this. Those that have joined have asked great questions and we’ve had some really in-depth discussions, so it has helped some achieve deep learning even during this time.

I think it did help that our topic for the past weeks has been ‘The Black Death’, so there have been lots of similarities found by the students and the discussion has been quite lively! That was really interesting.

I had to adapt the structure of my teaching, we couldn’t do our usual 2-week format or break into groups like we would in class. Instead, for instance, I shared some images with them, one was the dance Macabre and it helped them engage. I posted some brainstorming activities too ahead of our scheduled online webinar. I would usually alert them to this in class, but at the moment I’m emailing them. 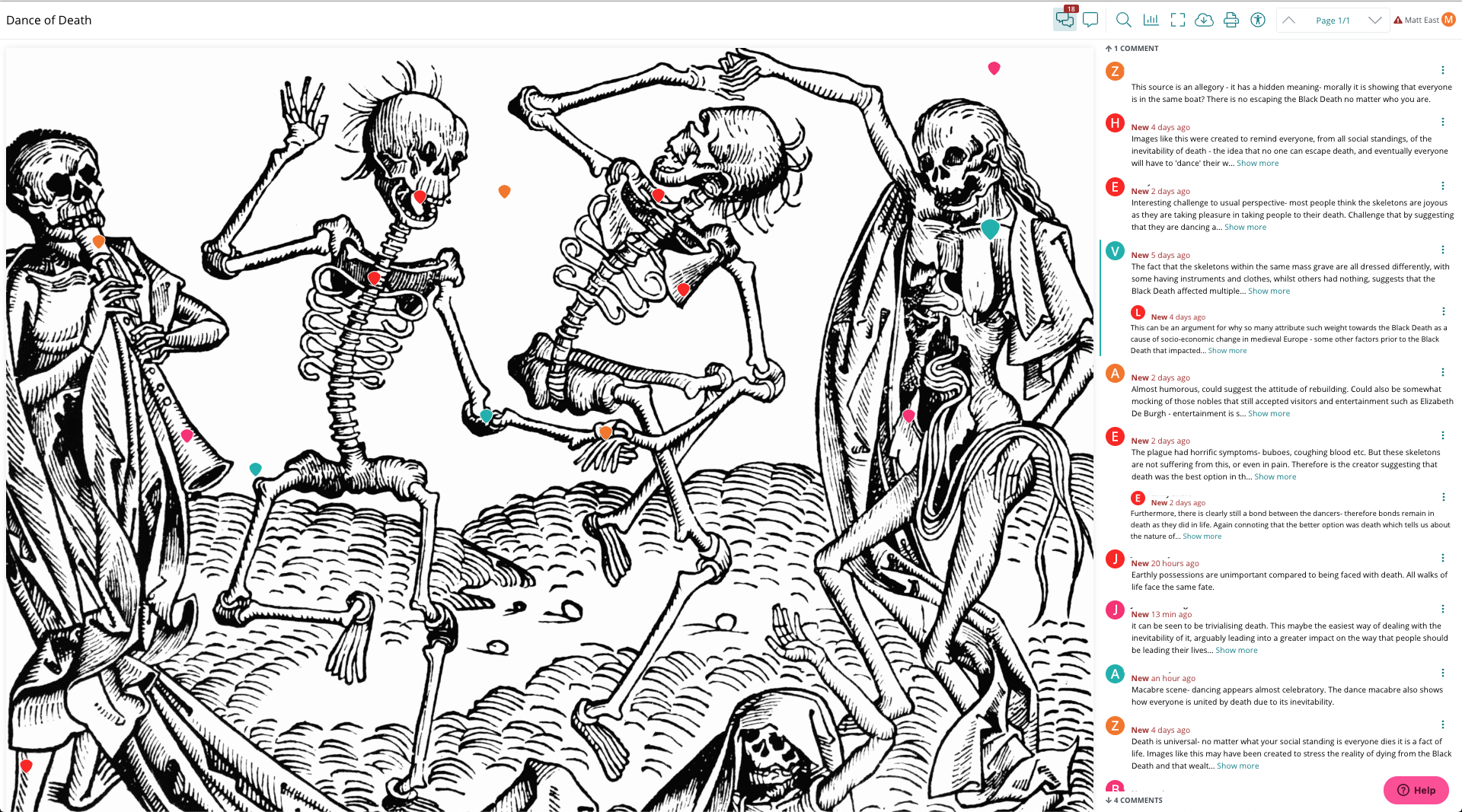 You mentioned you shared an image, did you make use of the image annotation feature?

Yes, it has been very interesting, it helped them to discuss a lot of the symbolism around specific areas of the image. With the Joan of Arc example, they talk about her hair, what she is holding and what the themes are around this and how it links back to the primary source.

This is the goal I had when I started this module, they were missing the symbolism, and with this tool, they are improving on this and making better connections. It’s now much clearer to them.

Could Talis Elevate be used more widely across the school?

I have lots of colleagues who are interested in Talis Elevate, there’s a lot of potential for it. I would like to extend it to my year two module too to help them work more in-depth with primary sources and to have this more continuous engagement with students. It’s no longer just sending an email and asking for them to read and comment, with Talis Elevate it’s a much more agile experience, I can discuss sources with students and keep the conversation open.

I have a colleague working on the same module, as it’s team-taught with 4 other people. She posts her own notes on the readings to give students support in a different way. We share some practice, but she works more with summaries of notes and uses it to pose questions. There are so many different ways to use it and that’s what we like. All of us can preserve our own idiosyncrasies and the way we teach with students, inside and outside of the classroom. It’s not about uniformity but allowing continuity and engagement.

Would you recommend Talis Elevate to other academics? What would you say to convince them?

It’s a no brainer. It’s a fantastic tool. It’s agile, it’s immediate and intuitive. You don’t need any training to use it, from the point of view of the tutor or the student. It has the practicality of making the material very approachable and easy to use by students, and what’s even better is that you can follow their progression.

I can sum up what I like about it in 3 points:

We’d like to thank Anna for her time and contribution. We’ve got plenty more stories about academics using Talis Elevate on our blog, check them out here.