Anyone who’s been involved directly or indirectly will have had a similar experience with a cohort of students. You ask a question to the cohort in front of you and get no response. This can be a really challenging issue for any educationalist regardless of the level of experience you have, and can quite easily railroad any active learning strategy you may have for your content.

The critical question here in my mind though, is why do students’ not feel they can speak out and question, and what can we do to enable discussion for those uncomfortable to do so?

During my time working in the sector, I’ve spent quite a bit of time pondering this question, looking at ways to remove barriers to entry for student engagement. Through discussions with students about interaction in a traditional classroom environment, the reasons for lack of speaking out cover a huge range of reasons, from lack of knowledge or opinion to confidence, to not feeling able to challenge the subject matter being portrayed by the academic. A really common problem that we often observe as well as the vocal minority; there’s always that one student who has an opinion on everything, who will speak out on almost all content or during all points of classroom participation. This can actually be a really disengaging experience for the rest of the cohort, as I’ve observed time and time again.

The use of anonymity to encourage student engagement isn’t a new thing. Research from Blake (2000) shows how anonymity in online learning environments can have a positive impact on the learning experience by removing the perceived risk of unconscious bias from peers and tutors. Building on this, research undertaken by Easton (2003) implies that many students’ feel anonymity creates a ‘level playing field’ amongst the student group. It’s important to help students through this process shape their digital identity and confidence though, rather than relying on anonymity as a safety net. Whilst academic identity can be developed effectively regardless of utilisation of a pseudonym, social communities of practice online can be restricted here for obvious reasons.

It’s really important to consider the different reasons why students don’t engage in activities and all the possible variances (and blends) of blockers perceived by those in your cohort. A critical one for me that I observed on numerous occasions relates to education culture previously adopted by your students. Giving one example, at my previous institution, we had a large proportion of international students forming part of 200+ cohorts in first-year studies. In many cases, these large cohorts were an amalgamation of students from a number of subject disciplines, learning the ‘fundamentals’ of core content; commonplace across the sector. However, what was important to acknowledge for these modules, in particular, were that many students had come from an educational culture where questioning the knowledge disseminated by the academic was absolutely taboo; everything should be taken as gospel truth, often resulting in students referencing their teacher time and time again in their assignments. Building on this, being from a widening participation institution, we encountered a number of students who were returning to education after a large period of time out, where key academic skills and fundamentally, knowledge of the subject matter, may have been a bit rusty. This can obviously create a difficult challenge but academics, but that’s for another blog post…
Jude Carrol (2012) refers to this as ‘academic transition’ where there are new practices, assumptions and expectations, and new standards to learn in a new educational environment. Changing this perception of the education environment early on is obviously integral to the success of creating and engaging, collaborative, and discursive environment, but this is just one example of many that need to be considered.

Developing the face to face and online learning community can make or break a course, especially if active learning elements are incorporated, or the cohort is geographically disparate. As Hodges (2004) details, the role of the motivator typically falls to the instructor but observed this role being taken up by members of the cohort previously, who have reported that their lack of confidence in their knowledge and understanding initially would have stopped them being able to get more involved. Anonymity gave them the ability to ‘test the water’ with their knowledge before getting more involved within the community once it was acknowledged they knew the subject matter. It was really great to witness this in action on a distance learning course, and something I feel is certainly a repeatable scenario. Creating a safe space, where students not only feel able to speak out but empowered to do so in a safe environment is key here, yet not exactly easy to achieve. Perhaps one of the most powerful mechanisms I’ve observed for encouraging activity is demonstrating you’re listening, engaging, reacting and changing your delivery based on what you observe from the interaction across the cohort.

Gather feedback, and make a change

During my quest to remove barriers to entry for students, I tested a number of hypotheses to engage the silent majority and to form new approaches to group work. I incorporated strategies such as disagree/commit often used in business, mixing up groups with students based on their own assessment of their approach to learning (note: NOT their own perception of learning style) to, of course, finding technologies to help facilitate this better. One of the things I found most successful though, was giving all students in a cohort the live ability to feed into feedback to the academic in a safe space, where they aren’t identifiable to the rest of the cohort. A good example here is using quantitative tools like surveys and pinboards. I found in particular, using tools like Padlet, or surveys facilitated through Google Forms or PollEverywhere. But obviously, quantitative feedback or guidance can be limited. Having a qualitative element here can be really powerful.

When looking to implement an alternative approach to historical audience response system used in my faculty, I was keen to incorporate a facility that enabled qualitative feedback opportunities, greatly enhancing the ability to gather thoughts, feedback, discussion and debate amongst the cohort of students. We opted for PollEverywhere, in my opinion, the leading technology in this area, allowing users to respond via text, twitter, and web from any device. But there was one critical feature that I feel made this successful beyond the technology itself; anonymity by default.

During the evaluative process, we had a large number of comments from students saying the fact this was anonymous gave them the confidence to speak out, without the belief that they’d be seen as asking a stupid question, just ‘someone’ was potentially asking a stupid question. Likewise, a number of students reported that they were never confident to speak out in class, and this capability gave them a level playing field with their peers to voice their thoughts, opinions, questions and feedback. A key element of this from my perspective was giving users the capability to engage how they wanted to engage, vocally in class, or via audience response. We adopted an approach on many courses where we simply had an ‘any questions’ poll open throughout a lecture. This enabled students to pose questions throughout the lecture without distracting the delivery or activity. During the break, the academic would bring this up and feedback on the comments made,  often resulting in changes being made to the delivery or content being disseminated in and out of the class, and more importantly, showed the students that their feedback and input was having a fundamental impact on the shape of the delivery. Again, this came up regularly in student feedback as a real positive.

Because of this experience, we incorporated anonymous commenting into Talis Elevate early last year, but with a shift from most system approaches; we gave students the ability to self-select if they write a comment anonymously or not.

Over the past year, we’ve seen a number of cases where this has been used as a mechanism for encouraging participation and input to the activity.

Jasper Shotts, Dean of Lincoln Academy of Learning and Teaching has previously talked about his use of Talis Elevate as a core tool on his modules last academic year. One of the approaches he took with his use was as a diagnostic tool; to gain a better understanding of the students’ learning, and understanding around the assessment task. Every week, Jasper incorporated a collaborative case study into his teaching, asking students to participate with their thoughts on how to approach a challenging situation in a social work context. Jasper encouraged the anonymity feature, knowing his cohort had a large number of students who didn’t often speak up in class, thinking this may be a way to encourage input from these students. Below is an example of this from Jasper’s course.

Over the duration of the course, Jasper observed the number of unique anonymous posts decreasing, and the number of named posts increasing. At the offset of the task, Jasper reported “The vast majority of the cohort engaged but utilised anonymity. As the discussion progressed throughout the weeks, the level of dialogue between the cohort increased between the students, and the level of anonymous usage decreased”.  This continued throughout the module delivery, to the point where nearly all students posted showing their names. More importantly, Jasper had direct feedback from students’ on this course that they wouldn’t have engaged without this capability, and seeing others posting anonymously, and the dialogue between students following this was the encouragement required to bring in more discussion. 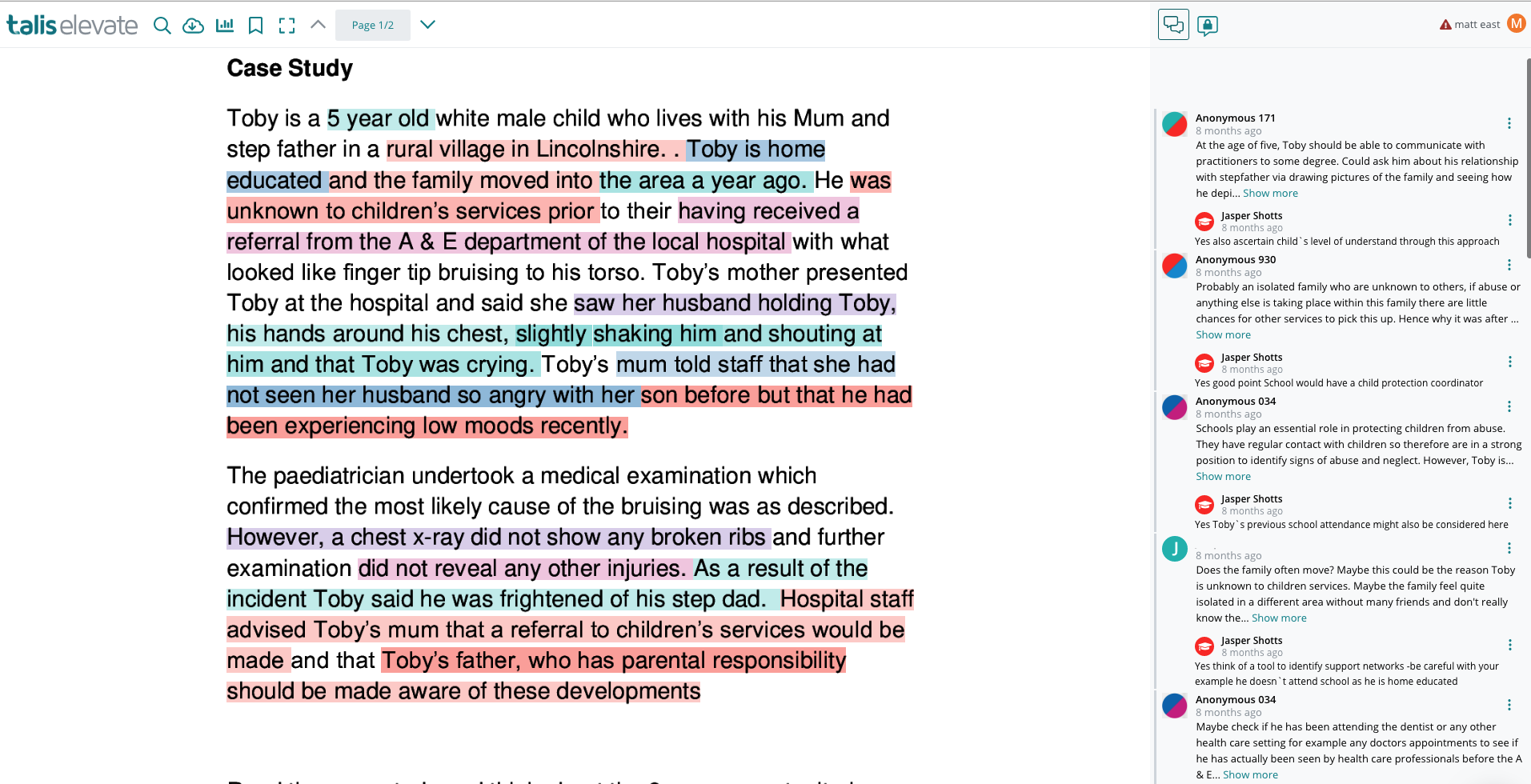 Whilst this wasn’t part of research activity, it does indicate this could be an area for further investigation. You can hear more from Jasper here.

We all will have struggled with the lack of engagement from students on collaborative activity, and as discussed there are a number of reasons for this. We’ve observed first hand the impact that anonymity, and giving students a choice in how they post and collaborate. Over the next academic year, we will be observing the use of anonymity across our courses in collaboration with our users, building case studies of how this is being used in practice, and how anonymity can better facilitate pedagogic activity